By Beau Eastes / The Bulletin / @beastes 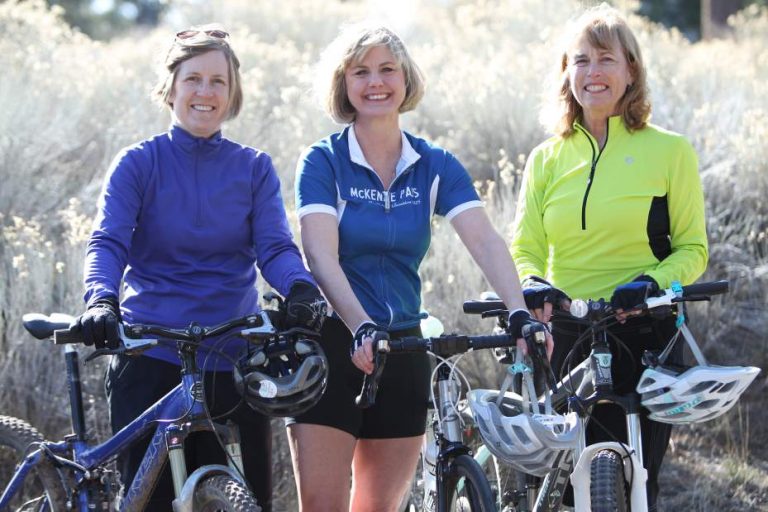 Sheri Fayal’s “aha moment” came on the Whoops Trail, but it was far from an accident.

An occasional mountain bike rider who would “tag along” on rides with her husband when they moved to Bend three years ago, Fayal had never dared going down the notoriously fast and flowing trail in the Phil’s Trail complex west of town. But then she joined the Bend Bellas, a local women’s cycling group.

“Whoops was always so intimidating,” says Fayal, 47, who began biking with the Bellas last spring. “My husband eventually went down Whoops with a GoPro (hands-free video recorder). … I watched the video and thought, ‘I can do that.’

“Several of us (Bella riders) had never done Whoops before, but we mustered up the courage and did it,” Fayal adds.

“We were screaming ‘Woo-hoo!’ — taking the turns and jumps and using all these different skills on this rolling terrain. That was my aha moment of, ‘OK, I can do this.’ ”

Helping develop “woo-hoo!” experiences since 2004, the Bend Bellas host their annual kickoff meeting April 10 at Pine Mountain Sports. The organization, created, to enhance women’s cycling experiences, road and mountain, has grown from about a dozen members its first year to more than 100 who paid the $25 yearly dues in 2013.

“Women ride differently than men,” says Lynne Herbert, 45, who has been a Bella member on and off for the past five years. “Women are a little more chattier with each other and there’s a little less competition out there and the riding is lighter in terms of intensity. And some women are intimidated riding with men. They’re worried they’re not good enough or they’re not a gear head.

“Basically,” Herbert adds, “being with other women, it feels safer to (mess) up.”

All riding abilities are welcome, Bella president Barb Smith says, and riders are never left behind during a ride. Ever.

“Initially, it’s a physically and mentally comfortable place for women to come to,” says Smith, a 64-year-old retired physical education teacher from Northern California. “I can’t emphasize enough, (the Bellas) is a place for riders with similar abilities. … We never drop anybody. Someone can show up for a ride and their ability might not be what the group needs, but they’ll never be dropped. We’ve all been in that position where we felt like the weakest in line. You don’t forget how that feels.”

Leaders often break down basic techniques during beginner rides, Fayal says, pointing out things like how best to take a banked corner or handle a fast downhill section of trail.

“It’s just so awesome to see each other supporting one another and clapping,” she adds. “It’s empowering to meet those challenges and it’s great fun to be part of a group.”

With participation numbers exploding, Bella riders have numerous options of when to ride, where to ride, and whom to ride with. The 9-to-5 crowd typically organizes evening and weekend treks, while the retired set and cyclists with a less conventional work schedule hit the trails just about any time the weather permits. Ride descriptions are always fairly detailed, including distance, length of time, and a suggested ability level.

“It’s just a great group of ladies that really want to support one another,” says Fayal, who in one riding season went from novice to ride leader after building confidence and riding skills with the Bellas. “There’s ladies 15 to 20 years older than me that kicked my butt, and it was fantastic. They help us newbies out.”

The Bellas tackle cycling adventures all over Central Oregon, everything from beginner mountain bike rides to Tumalo Falls, road rides up to Mount Bachelor, and scenic — but challenging — routes around Waldo and Suttle lakes. The group is essentially a social club with cycling problem, as members often get together in the offseason for things like yoga, wine tasting and holiday parties.

“We enjoy each other’s company and we like being around one another,” Smith says. “Some of my best friends are through the Bellas.” 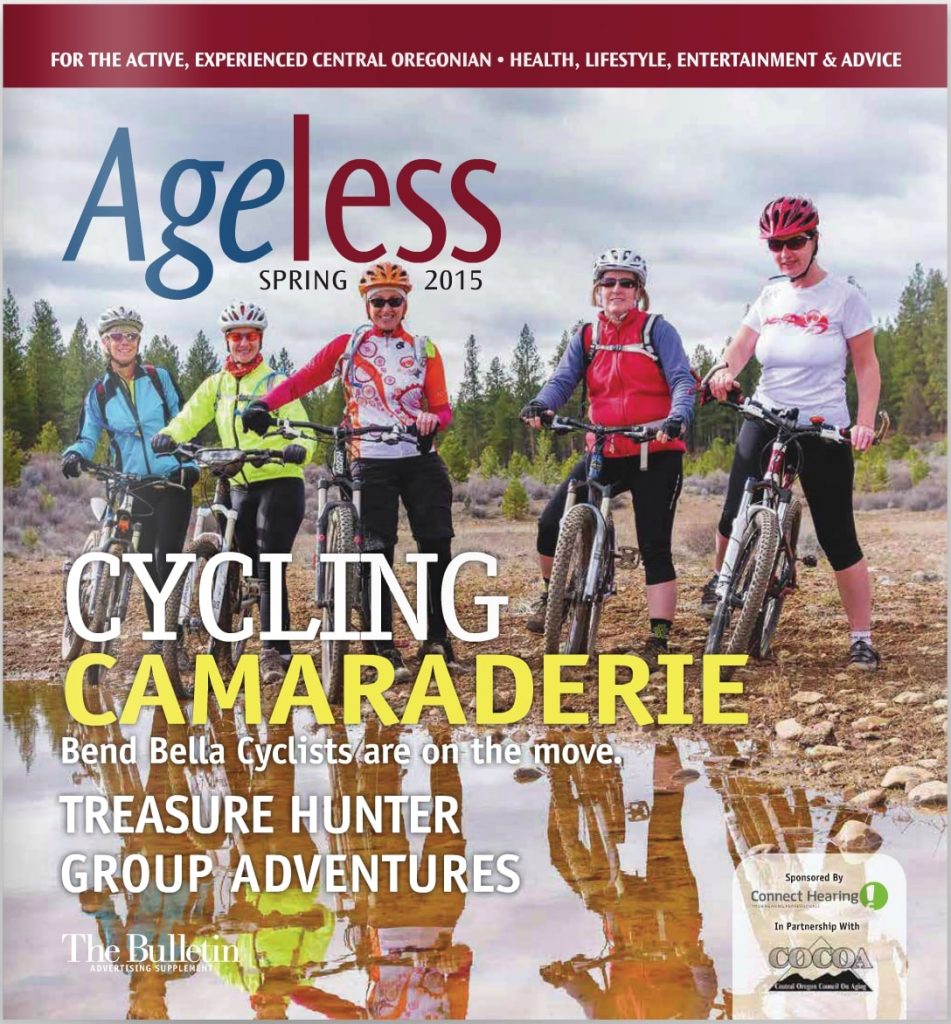 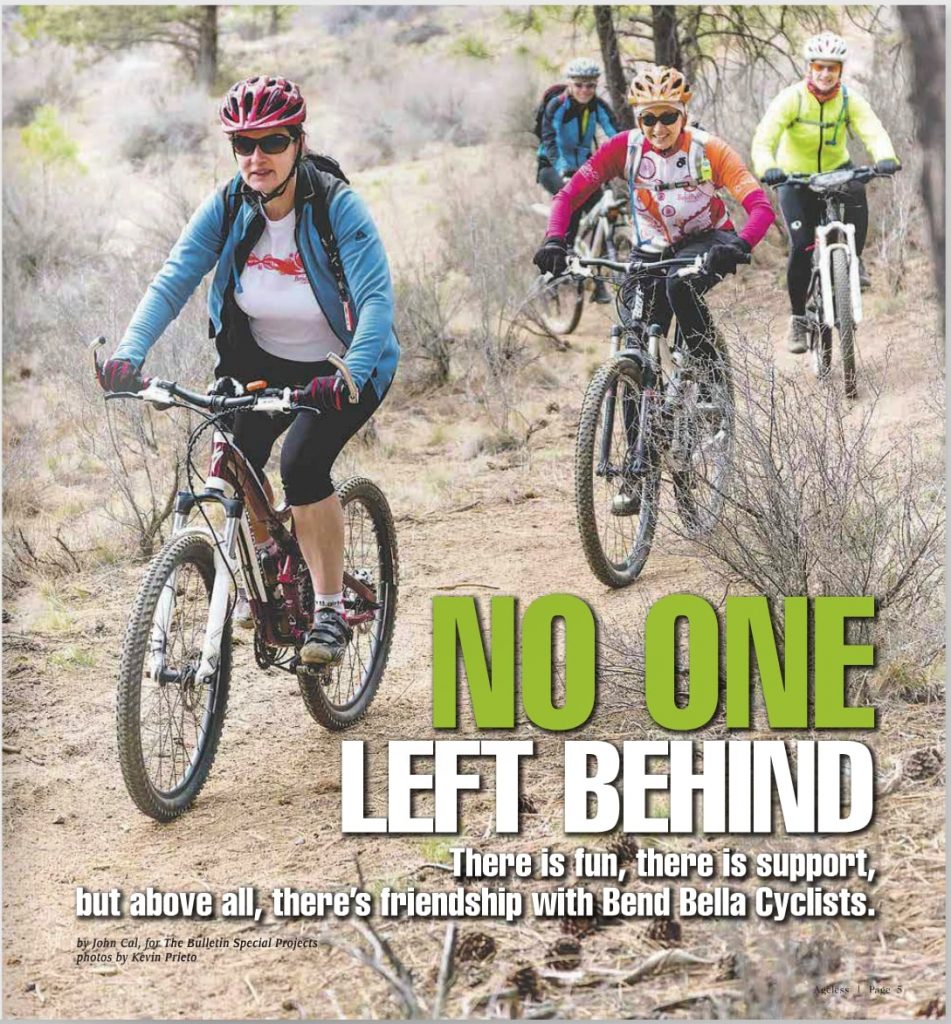 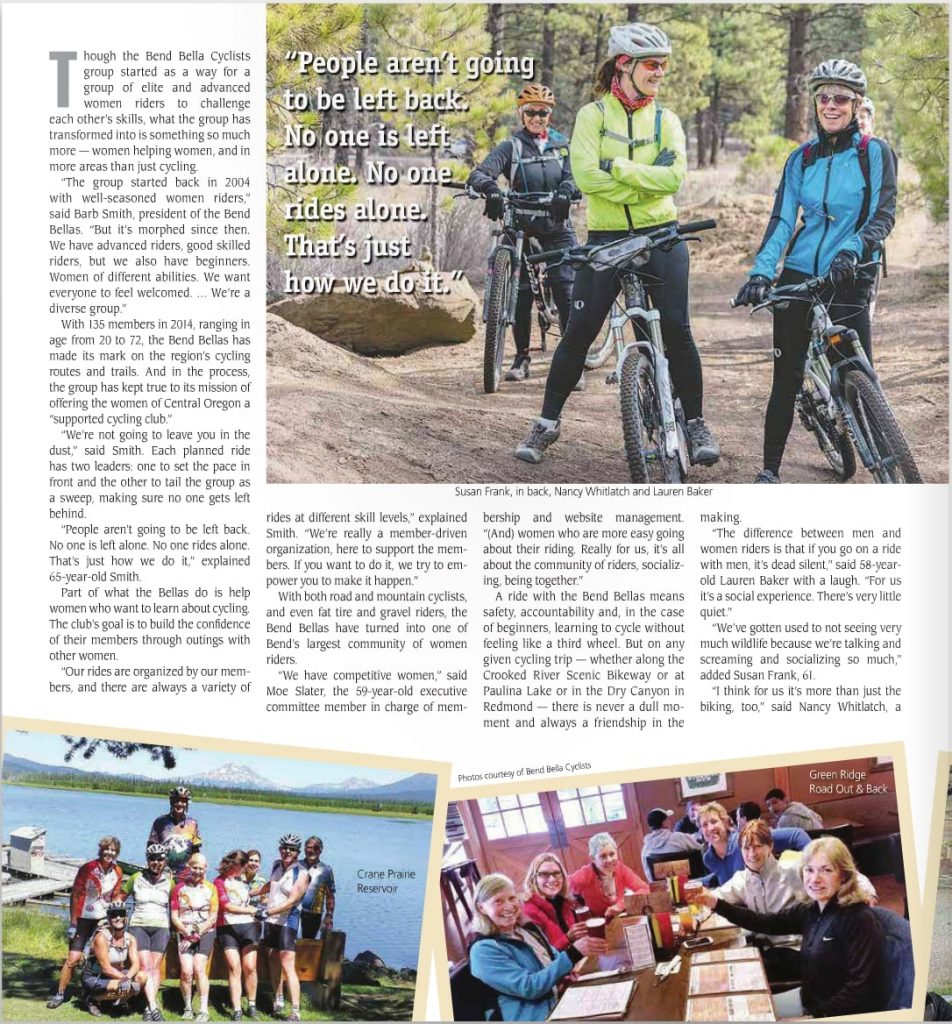 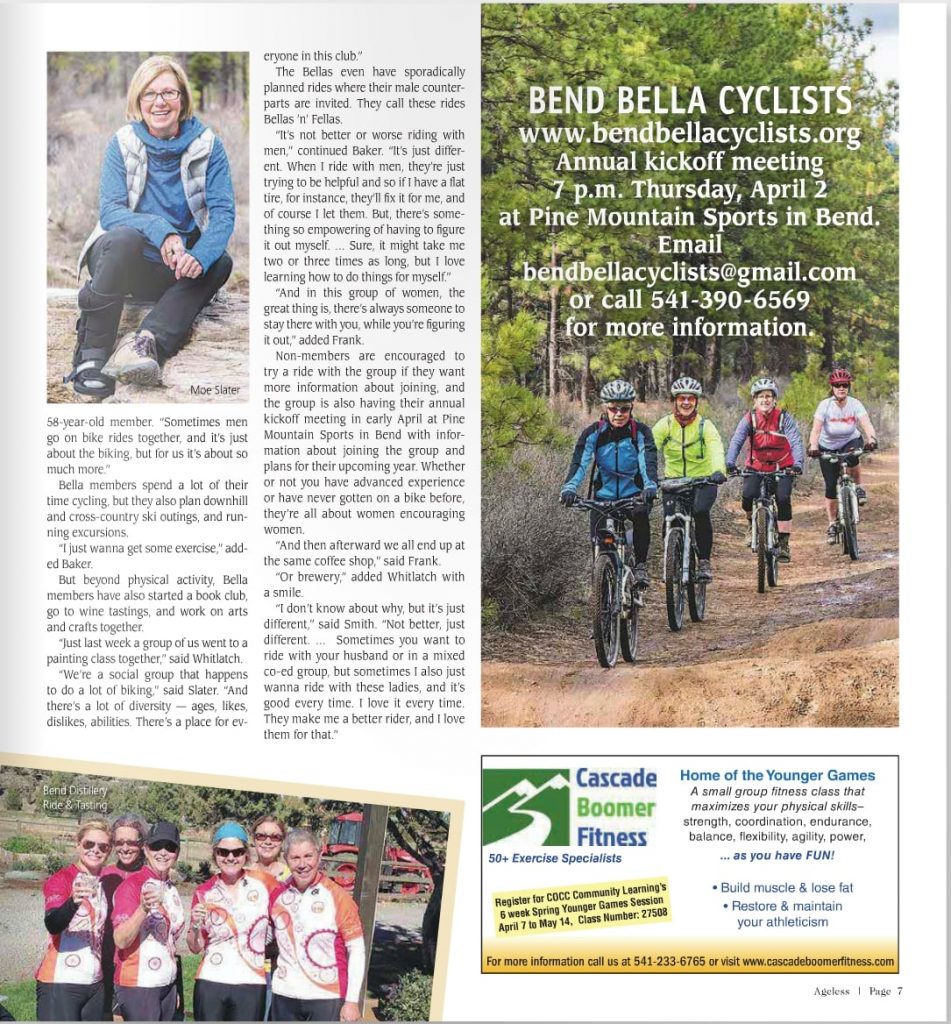